"I [Valentin Malanetski] see the goal of performing in the establishment of intimacy, the opening towards oneself and others.”

The Moldovan-born pianist Valentin Malanetski will be the partner of the 64th performance of the do trans-Art series by Astrid Rieder. Malanetski sees the goal of a performance in establishing familiarity and opening up towards oneself and others. It is precisely this pursuit that shows the essence of trans-Art. Together with the Salzburg Mozarteum graduate, Astrid Rieder explores the depths of consensus-based dialogue. Through the interplay of new music and abstract drawings, a common level should be found and linked to a non-verbal conversation. Astrid Rieder cordially invites you to be there live and to immerse yourself in the artistic dialogue of do trans-Art_64.

intensified art experience through optimized synergy of audiovisual artistic collaboration. The main focus is on the dialogue between art genres and the opening of traditional, encrusted and art immanent barriers. The Composition graphique musicale is based on the concept of a dialogue between contemporary music and abstract drawing, which is continuously and interactively modulating during the trans-art performance. The final product is the large-scale drawing, the recorded video and the sound recording.

Especially in view of the current social discrepancies, the dialogue seems to be decisive as a means of communication between two parties. At the 63rd performance of the do trans-Art series, the Viennese cellist Sebastian Jolles met the visual artist Astrid Rieder. The drawing artist and the musician agreed on rhythm, pitch and tonal language. Although the sound of the drawing and the instrument speak different languages, they can interact with each other through openness and mutual understanding. The common intersection is important and not only serves as an effective aid in art. Social upheavals, such as the Corona crisis or the Afghanistan debate, also need a mutual "approach": Language, integration and the added value of both sides are paramount. Learning from one another increases the overlap and avoids polarization. The 63rd Composition graphique musicale shows the social division in which the world, and especially Europe, is currently located. Not only the physical expression and the drawing noises, but also the lines, shapes, hatching and condensation in black and red are a warning to society. In order to prevent such problems or to solve them peacefully, understanding and social and cultural-artistic integration are required. 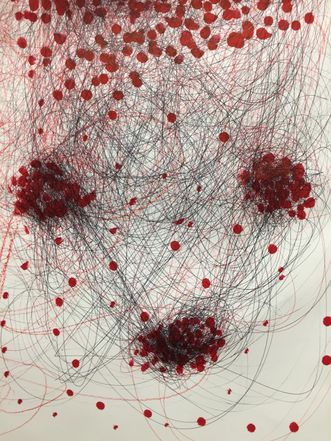 About the trotting of the sounds

Astrid Rieder and the Spanish composer and guitarist Agustin Castilla-Avila, who lives in Salzburg, conducted a very special do trans-Art dialogue with three white electric guitars and intensified drawing noises. The optically and acoustically appealing sound installation of the electric guitars, which were attached to the left and right of an armchair installation by Fritz Rücker, reinforced the acoustics through the metal tubular frame of the armchairs. This made it possible to create a great variety of moods and sounds that are reminiscent of a Persian oud and unleash images of trotting camels. The simultaneously fine, trotting sounds harmonized and synchronized with destructive, dark sounds, which were first graphically represented by individual lines, later with clear condensation. The do trans-Art dialogue led the audience to discoveries, transgressions and also on new paths. 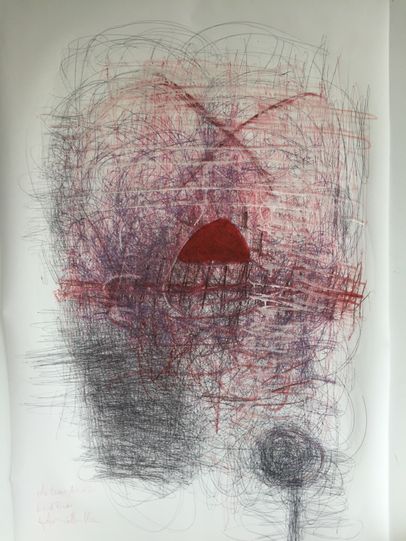 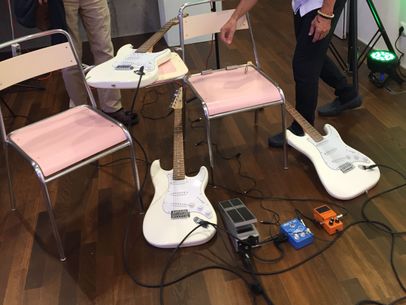 After a strong year full of sudden changes in our everyday life, one question is posed: has our view of social norms and basic values, caused by these results, ever changed? Astrid Rieders trans-Art wishes to take people on a path of peaceful, constructive and future-shaping dialogue. In doing so, she focuses on the values of a society that is open to new ideas. In the 61st performance of the do trans-Art series, the artist will interact with Anna Koch, clarinetist. The two protagonists hardly know each other, but want to show how constructive engagement with one another can lead to a productive result.

Review: trans-Art at Shakespeares by niM and Hear with Andreas Tentschert, Piano

To look at music is a different process as well; I like to see sounds as a shape and color. (Sophia Ogielska on her conversation with David Tudor)

To look at the sound - to recognize its shapes and colors - this process could be regarded closely in Astrid Rieder's trans-Art performance on June 30, 2021. As part of the niM and Hear series at the Café Shakespeare, Astrid Rieder and Andreas Tentschert, pianist and music historian, created an audio-visual presentation of trans-Art. Listening to music and interpreting music is some other process than viewing and audio-visually listening to music. In trans-Art abstract dimensions meet compositionally in completely new spheres and give protagonists and the audience an active access to the communication between new music and abstract art.

Review: Austrian Music Week Salzburg and do trans-Art_60 with Romana Kemlein-Laber and Hermann Stangassinger on June 10 at 7:30 p.m. at the trans-Art Studio 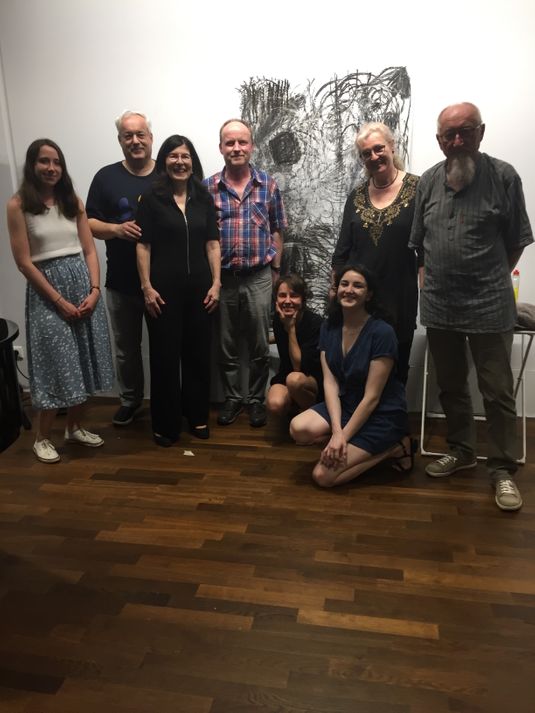 trans-Art Studio in Salzburg, Austria, is a bee-hive of activity.

We feature articulate voices in art, in dialogue and seek the experimental. At the 60th do trans-Art performance, which in June of this year is coupled with the Austrian Music Week there will be performances in Salzburg, Vienna, Klagenfurt and Graz.

The main topic of the Austrian Music Week this year is “Improvisation”.  This large subject matter will be musically interpreted by composers and performers of ACOM, the (Austrian Composers Association).

In order of appearance:

This event will include a live audience in Salzburg if possible.

The internet audience should contact the ACOM (office@komponistenbund.at) in order to register for access to the live stream.

Further information to the Austrian Music Week, concerts and dates, can be found on the ACOM website.

Peter WesenAuer and Astrid Rieder meet for the 59th do trans-Art performance in the trans-Art Studio Salzburg. Peter WesenAuer, pianist and composer, exploits the power of the piano and develops a driving and at the same time playful force, which Astrid Rieder replies to with her drawing. Almost threatening soundscapes are replaced by delicate and light-footed ones, which leads to a bright clearing. Astrid Rieder's graphic composition, finds its place on the paper canvas, develops broadly and delicately with strongly concentrated accent points in dark red and muted yellow. At the end of the performance, the tension of the artistic dialogue slowly drains like a river in the valley and then flows into a pleasant calm.

This is the motto of the 59th performance in the do trans-Art series. The guest is the conductor and pianist Peter WesenAuer. Together with Susanne Hehenberger, he produced the 12th and 13th episodes of the "Great American Songbook" in the studio of Astrid Rieder in Wals near Salzburg in March. With their online "CoronaConcerthall", they want to bring American entertaining music of the mid-20th century closer to the audience.

Peter WesenAuer not only masters a wide variety of music genres, but also lets himself be inspired by instant composing in new music.

As chief conductor of the "Sinfonietta da Camera Salzburg", Peter WesenAuer will return into the studio and conduct a dialogue with Astrid Rieder on the piano.

Review: do trans-Art_58 on April 8 with Celina Hubmann and Leonie Rothbucher

What happens if two musicians, the Duo Celeo, meet the visual artist in a trans-art performance? The goal of this extraordinary, 40-minute, spontaneous interaction is not only to make progress, which is an important requirement of trans-Art, but also to perform well-balanced in the symbolism of an isosceles triangle.

New look to a completely fresh Composition graphique musicale. The core of this compositional activity is the conceptual aspect of this interactively modulating dialogue. It's about the interactive creative process, not the image and the sound, even if they remain. Spurred on by the peculiarity of creating a do trans-Art performance with three people, trans-Art shows again and again what harvest can be brought with balanced, benevolent exchange between individuals.

The harpsichordist Svetlana Grots-Lanskaia, amazed as a trans-Art performance partner who despite the current odds, supports art with enthusiasm and resilience.

The dynamic and overwhelming energy of her piano playing made the young musician’s music appear like a roar from an unleashed lioness. Astrid Rieder playfully chased the music of the wildcat with her drawing on the paper canvas.

The alternate engagement, the efforts to lead a dialogue, a mutually modulating artistic form of expression result in a mutual Composition graphique musicale that cannot be separated. Like fresh water from a gushing spring full of liveliness, Svetlana Grots-Lanskaia and Astrid Rieder satisfied their dry thirst for artistic experience in the 57th do trans-Art performance. Precious moments like these push resilience and provide resources of inspiration for the time after the lockdown.

In the 56th performance of the do trans-Art series, a "we are" feeling was created. The "we are" concept made it possible to experience all these effects, which was brought to life through the dialogue between Astrid Rieder and Agustín Castilla-Àvila. Was it the bi-tones of his classical guitar including capos* or Astrid Rieder's different drawing materials: the abstract content of trans-Art requires understanding and a sense of belonging from the other person. The other one becomes part of the "we are" concept. Through the feeling of belonging, the trans-Art artists enable a product that can only arise from the "we are".

*Capos allow the vibrating guitar strings to be shortened

Two broadcasting slots at the Radiofabrik 1st and 3rd Saturday per calendar month, at 11am „Studio of contemporary music/trans-Art“

do trans-Art_63 with Sebastian Jolles, Cello

Two transfers at RadioFro. Always on the 2nd and 4th Tuesday per calendar month, at 11pm.

transfer of the broadcast studio about the do trans-Art_63 with Sebastian Jolles, Cello

transfer of the broadcast: retake of the do trans-Art_62 with Agustín Castilla Àvila (due to server errors by Radiofabrik)